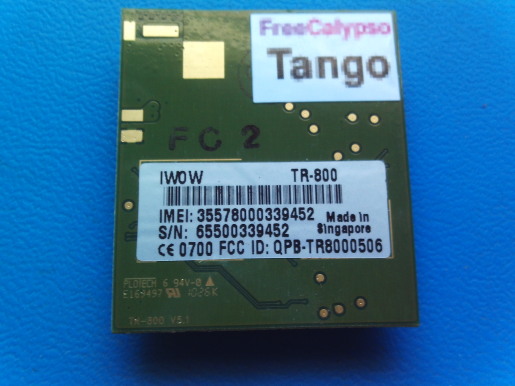 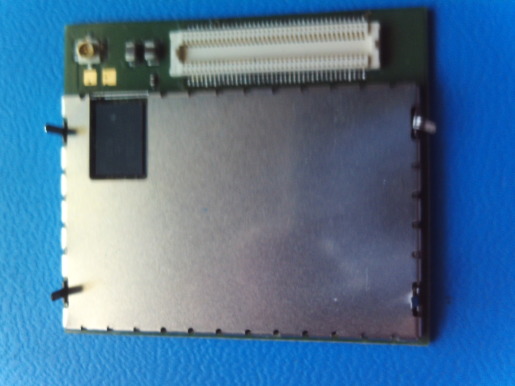 FreeCalypso Tango is a compact packaged GSM modem module containing our legendary Calypso chipset inside. These modules were originally made by iWOW Connections Pte Ltd and marketed as iWOW TR-800, but they are now being rebranded as FreeCalypso Tango. Our rebranding of these modules from iWOW TR-800 to FC Tango consists of the following changes:

We have two documentation directories on our FTP site that relate to these modules:

For complete understanding of the module hardware and how to work with it, we recommend that you read iWOW's TR-800 GSM/GPRS Module Product Technical Specifications document and our FreeCalypso Tango Module Integration Guide.

Over the past decade there has been an explosion of various indie hardware projects that incorporate cellular modem modules, particularly Linux-based smartphone projects that follow the architectural model originally pioneered by Openmoko, consisting of separate application and baseband processors. All of these projects currently use common off-the-shelf packaged modem modules for the cellular baseband processor part of the solution, but all of those COTS modem modules exhibit a severe moral flaw: their manufacturers refuse to publish the source code for their firmware or any detailed technical documentation regarding their internals. These module firmwares often contain deliberate backdoors that allow parties other than the user to take control of the device, and they typically include the truly egregious malfeature called FOTA, the mechanism whereby shadowy entities can reflash the modem firmware over the air without the user being even aware of it, while firmware loading by the user is actively prohibited.

FreeCalypso Tango is a moral alternative to these proprietary black box modem modules. Unlike our proprietary competitors, we publish complete hardware documentation for our module internals (schematic source in our ueda language showing all components and interconnections between them, as well as detailed documentation for every chip), and we publish the complete source code for our firmware. Our firmware does not include any support whatsoever for FOTA, instead the only party who can load new firmware into the module is the rightful owner of the Linux smartphone or whatever higher-level system design our module has been integrated into. Calypso boot ROM is permanently enabled by module wiring, thus our flash is unbrickable (you can always load new firmware no matter how badly you manage to corrupt your flash), and our Calypso chip does not include any kind of secure boot restrictions — it predates the introduction of such evil practices.

FC Tango is not a direct drop-in replacement for any of the common proprietary modem modules, thus the design of the Linux smartphone or other higher-level system will need to be modified in order to incorporate a Tango modem instead of the proprietary one — but this change is a morally necessary one. In the Mother's opinion it is morally impermissible to design a half-free Linux smartphone in which the modem part is 100% closed and proprietary when a 100% free alternative exists — so do the morally right thing and make your Linux smartphone or other gadget 100% free, rather than only half-free.

Yes, FC Tango only supports GSM/2G and can never support anything newer — but the morally right way is never easy, and a choice needs to be made between doing the morally right thing vs. doing what is popular and trendy.

An important point needs to be made regarding terminology: a given module should be called iWOW TR-800 if it runs iWOW's firmware, but it should be called FC Tango instead if it runs FreeCalypso firmware. When iWOW created a product which they named TR-800, their definition of this product consisted of both hardware and firmware, and the name iWOW TR-800 refers to that complete hw+fw product. FreeCalypso Tango, OTOH, is made from just the hardware part of TR-800, without iWOW's firmware.

All of the advantages of FC Tango over common proprietary cellular modem modules that were extolled in the previous section apply only when the module is indeed FC Tango — but they do not apply to iWOW TR-800! Unlike FC Tango, iWOW TR-800 is just another typical closed and proprietary modem module: iWOW's firmware is a binary code image sans source, and it is very different from our FreeCalypso fw.

iWOW's proprietary fw is derived from TI's TCS211 reference fw and so is FreeCalypso, thus it can be said in evolutionary terms that they share a common ancestor — but iWOW's version includes some TI fw components for which we never got any source and which are excluded from FreeCalypso (particularly the MMS application), and iWOW also made significant changes of their own to their fw, thus iWOW's firmware as a finished product does gawd knows what and should not be trusted. Even in the case of basic firmware components which exist in all TI-based platforms and which iWOW didn't modify, the version which iWOW got from TI (visible by way of version ID strings) is significantly older than the version that forms the basis for FreeCalypso, so it's an old version that does not exactly correspond to our source.

There are significant practical aspects to the difference between the two firmwares, not just philosophical. While all standard modems (really modem firmwares) implement the standard set of AT commands for GSM+GPRS modems, every vendor has implemented their own extensions and quirks. With FreeCalypso modems (meaning any Calypso modems running FreeCalypso modem fw) our set of AT command set extensions and quirks follows Openmoko's modem, but iWOW's extensions and quirks are totally different. Therefore, as a practical matter, any modem interface software that speaks AT commands to the modem will see iWOW TR-800 and FC Tango as two totally different beasts, with FC Tango being much closer to Openmoko than to iWOW. These practical differences are another reason why it is important to make the mental switch and think of the product as FC Tango and not iWOW TR-800 — and you do need FC Tango if you desire a modem that is unlike the usual proprietary flock.

Because it is a vertical market product, we do not plan on selling our FC Tango modules in any kind of webshop that allows automated order placement with no human interaction. Instead if you wish to buy these modules, you need to email Mother Mychaela and engage in a dialogue with me to work out specific arrangements.

The regular price for these modules is currently set at $40 USD apiece, and there is no minimum order quantity: you can buy just one module or thousands of them, or anything in between. If someone needs a larger quantity of Tango modules than the available surplus of iWOW-made ones, we can manufacture new modules starting from just chips (which are still available in even larger quantities than iWOW modules), and if someone needs millions of units, then even the chips themselves can be cloned. But for as long as demand stays low, rebranding iWOW-made modules into FC Tango is by far the least expensive route.

We also have a development board for these modules — please refer to that linked page for up-to-date availability information.

It also needs to be noted that you cannot simply buy iWOW TR-800 modules directly from Chinese Alibaba sellers in circumvention of Falconia family, flash them with FreeCalypso firmware yourself and expect them to work as well as the ones which we sell officially as FC Tango. Legally speaking, you will be in violation of copyright license terms on our firmware if you engage in such activities on a commercial basis, and you will be in violation of our FreeCalypso trademark if you sell your unauthorized version as FC Tango. And technically speaking, your DIY-converted modules won't work as properly as our official ones: our in-house conversion procedure involves more than just the firmware code image, we also apply some important corrections to the flash file system (iWOW's FFS is not entirely correct for our FC firmware), and we do not currently trust random third parties to perform this conversion correctly.